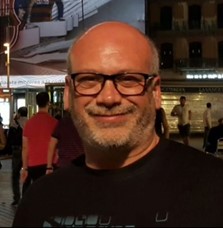 In lieu of flowers, donations can be made in memory of Irwin S. Berkowitz to the American Red Cross at https://www.redcross.org/donate/memorial-donations.html. Funeral arrangements are are pending from Star of David Memorial Chapels, 1236 Wellwood Ave, West Babylon, NY 11704.

Irwin Scott Berkowitz, 57, formerly of Jackson, NJ, died April 1, 2022, at his residence in Langhagen, Germany surrounded by family and friends after a long courageous battle with lung cancer. He was born in Brooklyn, New York, on November 30, 1964, son of the late Milton Berkowitz and Linda Hirsch Berkowitz. He is survived by his brother, Paul D. Berkowitz, Bethlehem, Pa. and his wife, Lori and their children, Matthew and Melissa; sister Wendy H. Berkowitz of Henrico, Va., Aunts, Uncle, cousins & beloved friends.

At the young age of twelve, Irwin attended an open audition in NYC and was accepted to train at the School of American Ballet where he would eventually perform in the Nutcracker at Lincoln Center as well as other various productions. Irwin graduated from Jackson Memorial High School, Jackson, NJ in 1981 and pursued his academic studies at Antioch College in Yellow Springs, OH. Irwin lived and worked in New York City for eight years before moving to Atlanta, GA where he worked in the Hospitality and Retail Industries. He received a Certificate in German from the Goethe Institute in Atlanta, GA. Irwin spent a brief time in Pittsburgh, PA and Detroit, MI with PSS World Medical before relocating to Rostock, Germany in 2006 where he would continue his studies of the Germany language at Linguothek in Hamburg, Germany.

During his 16 years in Germany, Irwin taught English at Berlitz and Allmed Medical Industries. In addition, he tutored school aged children and refugees to speak German and English and taught choreographed line dancing at the community college. Irwin said his final job as forklift operator for Nordex was his favorite of all. Irwin was also a member of the Whitehorses Line Dancers in which he both performed and choreographed.

Irwin was always one of those people who could make friends wherever he would go and could make people laugh like no other. He will always be remembered for his love of travel, architecture, sketches, maps, bridges, subway systems, storms, languages, teaching, dancing, Donna Summer, the Wizard of OZ, but most of all for his love of his family.

“A heart is not judged by how much you love, but by how much you are loved by others.” – Wizard of Oz. Irwin was loved beyond measure. Until we meet again… “There’s no place like home.”