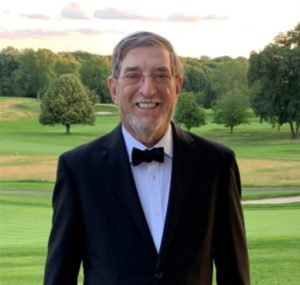 Donations in his memory can be made through Caris Hospice to one of many organizations that Bob supported: https://carishealthcare.com/donations/

Seiden, Robert (aka Bob, Bobby) passed away surrounded by love on Saturday, December 10, at the age of 82. Bob was born on May 1, 1940 in Brooklyn NY to Fannie and Benjamin Seiden. Bob graduated from Samuel J. Tilden High School before serving as an Army Ranger in Vietnam. After returning from his service, he began his career in the Sheet Metal industry, eventually moving to Pittsburgh to become the president of SSM Industries, where he retired in 2006. In his retirement, Bob moved to Myrtle Beach where he started a small business, Bob’s Handyman Services, and played a lot of golf. It was in Myrtle Beach where he met his wife, Peggy Crawford Bowers, to whom he has been married for 12 years.

A lifelong fan of the Brooklyn Dodgers – as well as any team one of his grandchildren played for. He was also known by any of his golf partners for making up his own rules of the game! Bob had a long history of caring for others, starting when he was young and served as a camp counselor for children with Cerebral Palsy and continuing through his dedication and care of the love of his life, Irene, as she battled early onset dementia.

Preceded in death by his brother, Daniel Seiden, his sister and brother-in-law, Harriet Seiden Brotter and Marvin Brotter, and his beloved wife of 39 years, Irene Kozichousky Seiden. Bob is survived by his children, Karen and Lee Levitt, Brad Seiden, Rachel and Ed Fagan, and his grandchildren, Maddie (Reece), Kyle, Sammie, Marla, Sophie, and Noah, in addition to his bonus grandchildren, Trish, Connor, and Nick. He is also survived by his best friend and adventurer, Jerry Greenberg. Bob had no “in-laws,” he considered all of them “just family”. He was the original “funcle” always good for a prank or a tickle. He will be greatly missed by his many nieces and nephews and their children.

The family wishes to extend a special thank you to his caregivers at NHC Health Care who took wonderful care of him throughout the last few months and Caris Hospice, who took gentle care of him though his last few days. Burial will be handled by Star of David Memorial Chapel in West Babylon, NY. https://www.jewish-funeral-home.com/ Shiva information can be found at this website. He will be laid to rest at Wellwood Cemetery where he will dance once again with Irene.

Bob was one of the most generous guys I know. He loved gathering everyone together and treating! I always felt like family when I was with him and the other Seidens.

My sincere condolences to the family. Our prayers are with you. Julia and Corey

We will miss him greatly.